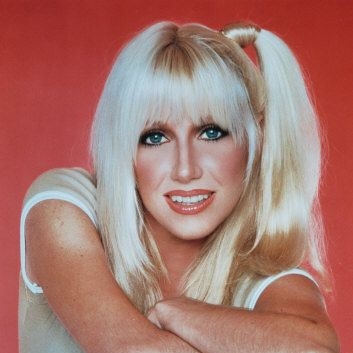 Named Christmas by her evangelical father, Chrissy is also known for her sweet demeanor and snorting laugh. This ditzy blonde is always lovable with her heart of gold and naiveté. Chrissy, with her trademark ponytails, can be a smarter cookie than she lets others believe. She works as a secretary and sometimes matches Jack with her own source of inexplicable logic.

One of America’s most popular personalities, Suzanne Somers has achieved extraordinary success in a variety of creative arenas. Since her days as Chrissy Snow on Three’s Company, Somers has gained renown as a New York Times best-selling author, singer, entrepreneur, and lecturer on the effects of addictions on families. She co-starred with Patrick Duffy from 1991-1998 in Step by Step and as the title character in She’s the Sheriff from 1987-89. More recently, Suzanne has hosted talk shows on the Lifetime Network and on YouTube’s CafeMom channel and is an advocate for healthy living and wellness.

Growing up in San Bruno, California, Suzanne Somers dreamed of a career in show business. She landed her first big break as the mysterious blonde driving the white Thunderbird in American Graffiti. Johnny Carson helped to jumpstart her career by asking her to appear on the Tonight Show and read excerpts of her book, Touch Me. Johnny introduced her by saying, “’You’ve all been wondering who the beautiful blonde in the T-Bird was and now we’ve found her.”’ She appeared on the show more than 150 times during Carson’s reign.

She is known around the world for her role as the ditzy yet loveable Chrissy Snow. Departing Three’s Company after five seasons and a People’s Choice Award for “Favorite Actress in a New Television Series” in 1978, Somers won critical acclaim starring opposite Anthony Hopkins in the 1985 mini-series Hollywood Wives. She won a second People’s Choice Award for her work in Step by Step. She has starred in adaptation of her autobiography, Keeping Secrets and television movies, Seduced By Evil and No Laughing Matter. She has appeared on stage at Caesar’s Palace in Las Vegas, Monte Carlo, Atlantic City, and Lake Tahoe. In 1986, she was named “Las Vegas Entertainer of the Year”.