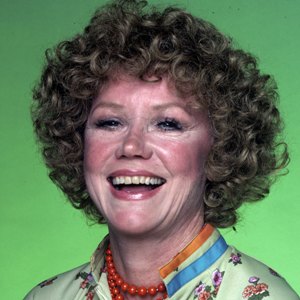 The “kids” could not have asked for a kinder landlady. Helen Roper is a warm, good- hearted woman who loved to laugh and be affectionate with her husband. If only Stanley wasn’t such a stick in the mud . . . . She is known for her kooky kaftans, bright colored jewelry and wiry, bright red hair.

Audra Lindley wore many hats in her lengthy career in show business. She was attracted to the entertainment industry at an early age through her parents, both of whom worked in “the business”. She began work in film as a stand-in for cast members and then went on to stunt work including tricks like horseback riding. Warner Brothers saw her talent and signed a contract with Lindley when she was a young age. The New York stage lured her away from Hollywood and while in Manhattan, she took time off to bring up five children. (No wonder why Mrs. Roper had such strong maternal instincts!) But it wasn’t long until she began working as an actress again.

Throughout her career, Lindley received numerous accolades for her work in theatre and television. She received two Golden Globe nominations, the first in 1973 for “Best Supporting Actress, Television” for her work in Bridget Loves Bernie and in the same category in 1979 for Three’s Company. For theatre, Lindley won a Drama-Logue award for Handy Dandy at the Pasadena Playhouse, a New York Drama Circle nomination for Fire, the Best Actress Award forDeath of a Salesman at the Citadel in Canada, and a New York Drama Best Actress nomination for About Time in 1990. She graced the Broadway stage with Julie Harris in The Young and The Fair, co-starred with Art Carney in Take Her, She’s Mine and also starred in stage productions of On Golden Pond, The Magnificent Yankee, and Love Letters.

Having an impressive resume in both film and television as well, Lindley’s various films include The Heartbreak Kid, Best Friends, The Witching Hour, and The Relic. She starred in Another World, played Lisa Kudrow’s grandmother in Friends and Cybill Shepherd’s mother in Cybill. She passed away in 1997 from leukemia and was survived by her five children.