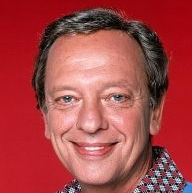 If wardrobe makes the man, then Ralph Furley is the monument to retro fashion. Mr. Furley wears with confidence leisure suits with scarf ensembles. And like love and war, when it comes to Mr. Furley’s fashion sense nothing is off limits, from plaids and prints to tangerine orange with medallions. Mr. Furley takes over managing the day to day duties for the apartment building when his brother purchases the property from the Ropers. Ralph considers himself to be a ladies man; a traditional bachelor of yesteryear looking to fit in with the new young and swinging singles world he meets through Jack, Larry, and the gang.

The star of nineteen motion pictures, his own television variety series and several specials, Don is known best for his comedy roles. He has won five coveted Emmy Awards for his flawless portrayal as Barney Fife on the Andy Griffith Show.

Don was born July 21, 1924 in Morgantown, West Virginia. Since boyhood, his ambition was to be in show business. As a child he was a movie aficionado as well as radio fan, concentrating on comedy shows. His idol was Jack Benny and at the age of twelve, Don recognized and tried to imitate Benny’s impeccable timing.

Edgar Bergen was another radio idol that inspired him to learn ventriloquism. After graduating from high school, Don enrolled as a speech major at West Virginia University, intending to become a teacher. His teaching pursuits were postponed when the army called. He spent the next couple of years touring the South Pacific doing comedy routines in “Stars and Gripes“.

After the army, Don finished school before heading to New York appearing on various radio and television programs. It was in Manhattan that he first met Andy Griffith in the Broadway play, No Time for Sergeants. During the run of the theatrical hit, Don began creating his own comedy material, thus was born the nervous little man, based on an after dinner speaker he once observed back home in Morgantown.

Next he went on to do the Garry Moore and Steve Allen Shows. In 1959, Don elected to move to Hollywood following the Steve Allen Show. He later joined Andy Griffith in what was to become the legendary series making Don Knotts a household name, and winning him five Emmys.

He starred in classic comedy movies such as The Incredible Mr. Limpet, Herbie Goes to Monte, It’s a Mad, Mad, Mad World, The Apple Dumpling Gang, and The Shakiest Gun in the West. He was lured back to television as a regular on Three’s Company, where he played Ralph Furley. He also has had guest appearances on other television shows including NBC’s hit Matlock, reuniting him again with Andy Griffith.

In the later part of his career, Don stayed active in the theater as well as voice-over work for animated projects. He played the character of Mayor Turkey Lurkey in Disney’s animated film Chicken Little in 2005.