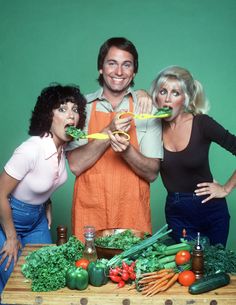 ‘Three’s Company’ Reboot May Be Coming to the Big Screen

“Three’s Company,” the iconic sitcom that made household names of John Ritter and Suzanne Somers, may be getting a reboot as a movie.

According to The Hollywood Reporter, New Line Cinema is negotiating for the movie rights to the classic TV show that ran from 1977 to 1984 on ABC.

“Three’s Company” focused on the hijinks of the two women and one man who shared an apartment in California. The original stars were Somers, Ritter and Joyce DeWitt playing Chrissy Snow, Jack Tripper and Janet Wood, respectively, in addition to a cast of supporting characters.

This would not be the first TV show to make the switch to the movie theater. “21 Jump Street” and its sequel raked in more than $500 million dollars, and fans are eagerly anticipating the big screen version of the mega-popular TV series “Baywatch.”

As Hollywood gets into the mood for movie versions of re-run gold, big stars are signing up. Mark Wahlberg will soon star in the reboot of “The Six Billion Dollar Man,” while Elizabeth Banks will helm another remake of “Charlie’s Angels.”

Fans are already campaigning online for who they want to play the “Three’s Company” roommates, with calls for Ashton Kutcher or Channing Tatum to play Jack and either Jennifer Lawrence, Anna Faris, Amy Schumer or Tina Fey to play Janet and Chrissy.

“The show is iconic, and the three characters are so big that a lot of actors want to get in on this … New Line will have no trouble casting,” Borys Kit, senior film writer with The Hollywood Reporter, told ABC News.