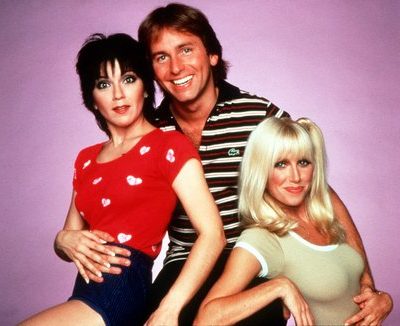 (via The Hollywood Reporter)

Robert Cort will produce the big-screen take on the classic sitcom.

New Line wants you to come and knock on its door.

The studio is in negotiations to pick up the rights to the classic television series Three’s Company, and is tapping scribes Abby Kohn and Marc Silverstein, the duo behind its 2009 hit He’s Just Not That Into You, to pen the screenplay.

Robert Cort, the veteran producer whose credits range from Tom Cruise’s Cocktail to Julia Roberts’ Runaway Bride, is attached to produce along with Don Taffner Jr.

Three’s Company was a top 10 show that aired on ABC from 1977 to 1984 and centered on the friendship forged between two single women living in Santa Monica who took in a man as a roommate, this in an age when such cohabitation was not a social norm. To keep the arrangement kosher with the landlords, the trio concocted a story saying the man had no ill intentions towards the women because he was gay. A comedy of errors, with plenty of innuendo, ensued week after week for eight seasons.

John Ritter had the role of his career (and won an Emmy) playing the young man, Jack Tripper, while Joyce DeWitt played the spunky brunette of the female duo. Suzanne Somers became a national sex symbol playing the dumb blonde, although she left halfway through the show’s run due to a salary dispute and was replaced by Jenilee Harrison and later by Priscilla Barnes.

The series, which was actually based on a British TV show, Man About the House, was known for its memorable characters. The landlords, played by Norman Fell and Audra Lindley, received their own (but short-lived) spinoff show. Richard Kline was Tripper’s on-the-prowl, used-car salesman best friend. And Don Knotts was a later landlord who believed he knew a thing or two about women.

New Line and the writers and producer are planning on having the feature set in the 1970s.

Hollywood went through a phase in the 1990s translating TV shows into movies. The Brady Bunch and The Addams Family were among the hits, but by the time 2002’s I Spy, starring Eddie Murphy and Owen Wilson, bombed, the well was running dry.

A revival, however, may be taking place. Just a few weeks ago, Paramount began shooting a big-screen version of 1990s mainstay Baywatch, starring Dwayne Johnson and Zac Efron. And Sony has made two 21 Jump Street movies that were hits financially and critically.

Kohn and Silverstein have made a name for themselves writing relationship-oriented movies such as Valentine’s Day and How to Be Single, both for New Line, and the Channing Tatum-Rachel McAdams love drama The Vow. The duo is repped by UTA, Management 360 and Sloane Offer.